We entered Peru as the light faded completely, so our first impressions were vignettes illuminated by pools of light from bare bulbs, of late evening scenes, families, groups and individuals, sitting outside small single storey homes and shops, in hammocks, doing chores, children playing. Crossing the border from Ecuador brought us our first encounters with mototaxis too, the typical transport of small-town Peru, motorbikes with bench seats at the back under an awning. We passed through a fruit growing region with piles of fruits, and boxes stacked high, for sale or for transport to larger markets. At last we pulled into Piura, and toasted our arrival in Peru with the bubblegum flavoured, flourescent yellow coloured Inca Kola, before collapsing into the worst hostel of the trip. We woke covered with a constellation of bedbug bites in their telltale clusters, and set off for the mountains once again.

Our next destination was Chachapoyas in the northern highlands, but all direct buses ran at night, something we had decided not to do on mountain roads in the rainy season. Instead, we bussed first to Chiclayo, paused for lunch in the sweltering main plaza, and then continued to Jaen where we spent the night. Chachapoyas was now in our sights, and the next morning we took a mototaxi and then two combis (shared taxis or minibuses) to hop between Jaen, Bagua Grande, Pedro Ruiz and finally Chachapoyas. It was a fun journey, first crossing the Maranon river, the young Amazon, high up in the mountains but wide even here. Then along a palm tree-lined road in a lush broad valley of vivid green rice fields, with scrubby red-earth hillsides rising up, and hazy blue mountains beyond. We turned south, away from the Maranon which was continuing towards Iquitos, and now the road followed a raging chocolate brown river, at the bottom of a steep ravine, with the road virtually carved out of the rock. Eventually we hairpinned our way up and out of the valley and arrived in the peaceful colonial town of Chachapoyas. The buildings were painted white, and the large plaza was lined with dark wooden balconies. 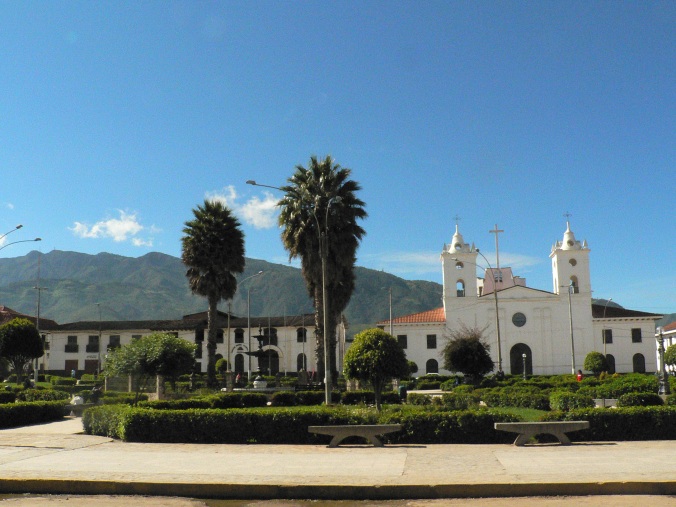 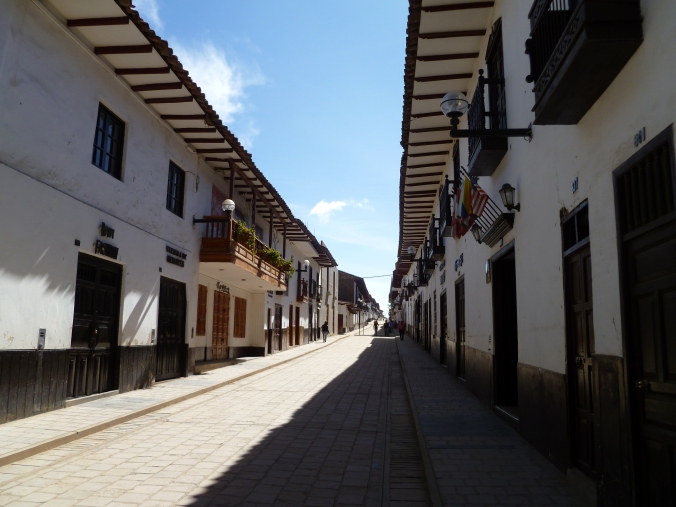 From Chachapoyas we headed to Huancas canyon close by, and then ventured to Kuelap, an archeological site to rival Machu Picchu in importance and setting. We descended to cross the river and then climbed up the other side, with staggering views of vast green mountains and valleys in all directions, the unpaved track clinging to the side of the mountain. At last we arrived at Kuelap, on the highest peak around.

A vast wall concealed the ruins inside, but instead of there being buildings on ground level on the other side, the wall was actually the edge of solid platform of stone. We enjoyed exploring the overgrown site as it felt like it had only recently been discovered. There were three levels built on top of each other, the most recent bearing the rectangular buildings of the Inca in contrast to the Chachapoyan circular buildings that were built first. The function of the site is still not fully understood – not quite a fortress or a city, but with homes still complete with pestle and mortar rocks, and guinea pig tunnels in the kitchen. The steep paths leading up into the compex have grooves worn into them from llama hooves, there were sacred carvings on the walls, and a temple was aligned with the sun at the solstice. A very mysterious place.