Imagine a fish isolated in an Amazonian lake — part of the vast freshwater ecosystem of the Amazon basin, an ever-changing network of rivers, lakes and floodplains that extends to 1 million square kilometers (386,102 square miles).

Now imagine that isolated fish as water levels rise during the wet season, and floodplains vanish beneath up to 15 meters (49 feet) of water. The fish — once restricted by the lake’s edge — swims freely into the flooded forest and mingles with others of its kind from elsewhere.

For thousands of years, isolated fish populations across the Amazon have likewise played a game of musical chairs: intermixing between flooding water bodies, migrating short and vast distances between lakes and along river channels, and then as the waters receded, forming new lake and river populations.

This connectivity — with the genetic mixing it affords — is vital for healthy fish populations, but is extremely vulnerable to changes in the annual “flood pulse” that inundates forests.

Read the rest of the article on Mongabay. 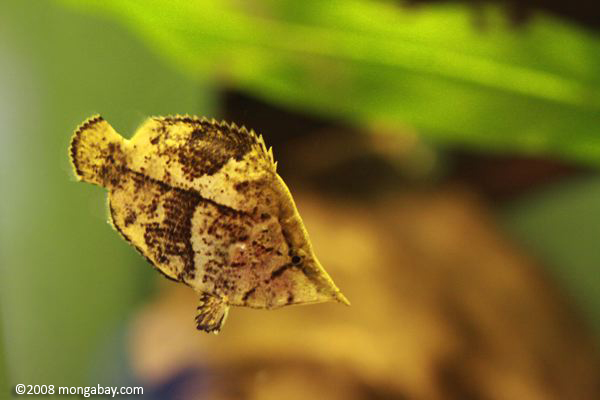 A South American Leaf Fish (Monocirrhus polyacanthus). More than 2,000 fish species live in the Amazon, the highest fish biodiversity in the world. That diversity has been greatly enriched due to the periodic isolation and intermixing of freshwater species that occurs across the region. Photo © Rhett A. Butler/Mongabay